The West often disregards the second-hand nature of water availability. However, approximately 798 million people suffer from water insecurity, and 1.8 billion don’t possess proper sanitation resources. Although access to clean water is a United Nations-sanctioned human right, it isn’t a reality for a vast swath of the globe. The city of Basra and Iraq-at-wide are case studies of this modern phenomenon. While the world’s involvement in Iraq has increased over the last few decades, the impacts of terrorism and conflict caused the global community to ignore insecurities impacting the modern Iraqi state. In part, the global community, especially the United States and its allies, hold much blame for the crisis’s intensity. This article will review a plethora of exogenous and endogenous factors contributing to this human rights crisis and will offer global solutions.

At the convergence of the Euphrates and Tigris lies the city of Basra, the “Venice of the East.” Basra aptly received this nickname for its vibrant economic development and abundance of water. Despite this past, Basra looks very different today: a community wrecked with a water crisis. Although all of Iraq has been wrought with hydraulic instability, Basra is the exemplar of this trend.

Before the coronavirus pandemic, over 118,000 cases of water-related illness wrecked Basra–something that wouldn’t be expected for a modern, economic hub. On top of this, approximately 4,000 residents were forced to leave their homes. The city’s Shatt al-Arab, the river in which the Euphrates and Tigris join, experienced an unprecedentedly low level of water flow which compounded the effects of disease, namely cholera, and pollution in the water. Low-income residents are particularly vulnerable to poor water infrastructure because of the increasing cost of water. Even when water is clean, it is not economically accessible for all.

Pollution is dumped into the river without prior treatment. Since water levels have decreased overall, pollutants have increased in potency, and seawater incursion has increased water salinity. The Shatt al-Arab is the main water resource fueling the city, but these water developments have decreased the water quality and endangered the lives of residents.

The Iraqi government has done little to intervene in the water crisis. Officials take little action to stop local pollutants. Projects to protect water quality go mainly mismanaged and unsuccessful. Additionally, Basra’s public lacks proper information about the crisis and the health of their river.

Although Basra is the epicenter of this water crisis, the whole nation is suffering in varying degrees due to a multitude of factors. As with any human rights dilemma, no one cause is solely responsible for the worsening quality of life in Iraq. One factor is Western intervention.

As American politicians seek to blame one another for the Iraq War, Iraqis have to deal with the real consequences. Since the Iran-Iraq War, Iraqi civilians have endured conflicts and suffered from the offensive maneuvers of foreign nations and aggressive actors.

When Iraq invaded Kuwait, Western nations combined their forces to invade Iraq and liberate the occupied nation. In this process, the United States carried out an extensive strategic bombing campaign as a part of Operation Desert Storm. This campaign in total destroyed $230 billion worth of infrastructure, especially related to Iraq’s waterworks. Combined with this devastation, the United States-led coalition imposed crippling sanctions on Iraq which almost resulted in a complete collapse of Iraq’s water systems. During this period, Iraq experienced a strict shortage of water treatment supplies until the loosening of these sanctions. Destructive forces during the Iraq War in the 2000s undoubtedly had similar negative impacts. Either way, U.S. action set in motion a precedent of water degradation.

Already recovering from the Gulf War’s devastating consequences, the Iraqi state was embroiled in armed insurgencies from Kurds and Shiite groups against Saddam Hussein. In southern Iraq, 300,000 people fled to marshlands, and Hussein drained the ecosystems to flush the revels out. In total, Hussein drained just under 20,000 km2 of marshlands, posing serious threats to the local ecosystem to this day. Even though efforts to restore the marshes have achieved relative success, droughts and salinity issues still plague this part of Iraq.

Most recently, the Islamic State lost ground in Northern Iraq and Syria, but their actions pose a lasting negative impact on Iraq downstream. Much like states surrounding Iraq (which will be talked about later in this report), ISIS used water as a political tool by regulating water levels. These actions were meant to influence troop movements, coerce civilians, and poison pro-government populations. On multiple occasions, ISIS flooded upstream communities and dried up downstream areas. In total, the Islamic State created $45.7 billion worth of infrastructure damage, negatively impacting Iraq’s water systems.

In summary, Iraq’s political instability is directly linked to water management. A multitude of out-of-state forces all contributed to Iraq’s water crisis. Especially with the limited water that flows into the region, the history of infrastructure degradation has limited Iraq’s current ability to manage its water resources. 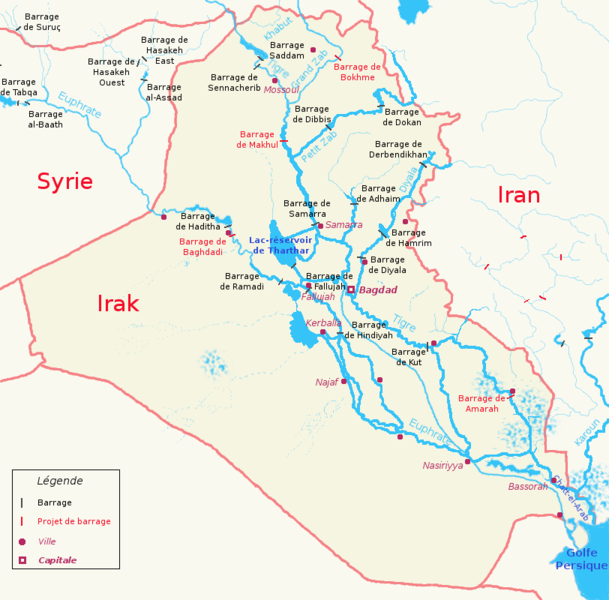 Tensions still flow down the waters of the Euphrates and Tigris at an interstate, national, and local level.

As external pressures on Iraq, Turkey and Iran constrict water flow into the region. Historically, Turkey self-proclaimed complete sovereignty over its water resources and planned construction of 22 dams under the Southeastern Anatolia Project on the Euphrates and Tigris. As a byproduct of this staunch political approach, Iraq bears the brunt of decreased water flows not only destroying agriculture but straining the water rights of Iraqi citizens. In total, Turkey has restricted approximately 80 percent of both river’s flow since 1975. This poses a real threat to citizens as 80 percent of Iraq’s water supports agriculture and 37 million people’s careers. With similar dam practices, Iran also restricts significant amounts of water flow into modern Mesopotamia.

On the national level, corruption and governmental instability contribute to the massive mismanagement of Iraq’s limited resources. Insufficient funding, low staffing, unrepaired infrastructure, and alleged corruption all mount systemic pressures on the water supply. As a result, in Basra, pipes experience 50 percent leakage, and citizens reported muddy tap water in 2018. The Great Basra Water Project, originally agreed upon in 2008, has failed to implement efforts to improve local water resource management since its inception. The public has seen little action on this infrastructure project with virtually no progress.

Cumulatively, the Iraqi people have expressed their political dissent and popular anger against these political crises. Again we must look at Basra as a case study of wider discontent. In 2018, rioters targeted government buildings over the water crisis and electrical outages. Triggered by thousands of hospitalizations caused by the crisis, the people of Basra took to the streets and burned government buildings. It can be argued that this political demonstration was tied to discontent with government action; however, this event attests that the Iraqi people bear the brunt of government inaction and are not passive actors in this conflict.

However, only acknowledging regional factors would not holistically represent the crisis’s universal causes. All of humanity contributes to water rights issues in Iraq in one form or another, mainly through environmental means. 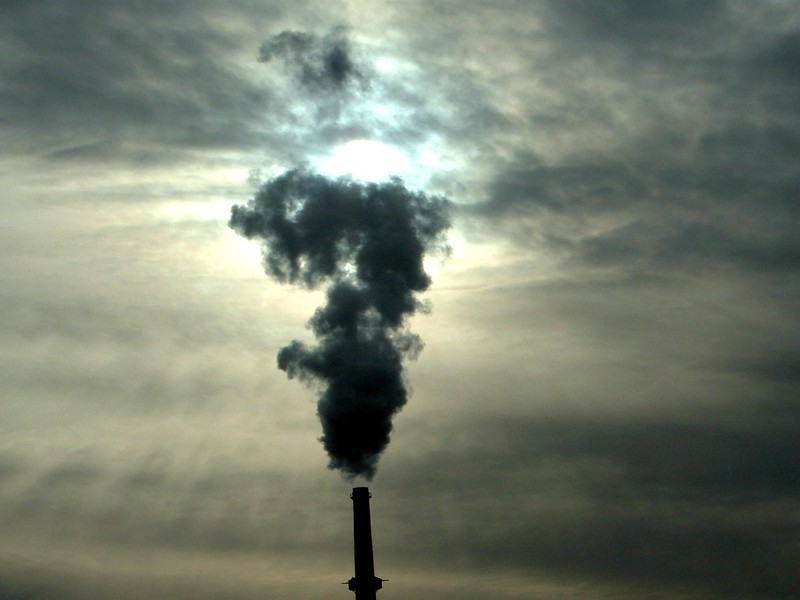 A Tragedy of the Commons: the Environment

On a macro-scale, climate change combines multiple factors to induce this human rights crisis. Rising temperatures contribute to decreased regional rainfall, weather changes, and increased evaporation. All of these factors are components of drought. With an already destabilized regional system, these climatic developments serve to exacerbate the crisis. Some regions are experiencing 70% desertification rates, and climate change has decreased rainfall by 10%–a dangerous combination. Although domestic proposals exist to ratify the Paris Climate Accord, Iraq has yet to take substantive action against climate change. Still, Iraq is at the whims of how other nations approach global warming, namely China and the United States. If foreign actors don’t take action, Iraq will bear the brunt of climate change’s early impacts.

Reduced water levels in Iraqi rivers will intensify another environmental strain: pollution. Far more potent due to less water concentration, unregulated pollution has become commonplace in Iraq. Although the Iraqi Constitution guarantees “the right to live in safe environmental conditions” and requires the government to “undertake the protection and preservation of the environment and its biological diversity,” these clauses are not enforced on the local level. Private pollution and raw sewage are pumped into the Shatt al-Arab. Compounding this crisis, at least 40 percent of Basra’s sewers go untreated due to poor sewage infrastructure, and algal blooms are commonplace in the city’s canals. Various sources find that Basra’s publicly rationed water system and private water providers both use poor sanitation systems. Significant amounts of water don’t reach Basra because it is illegally stiffened off by private organizations. In total, Iraq’s water goes systemically untreated, unregulated, and unprotected.

These factors lead to decreased direct access to water resources by the public, but the agricultural systems providing the nation’s food services are also under serious pressure. The damage to upstream dams and irrigation systems have cut electricity for Iraqi communities and have put farmers in grave danger. Farmers cannot produce at typical levels because of poor irrigation systems and poor quality government provided fertilizer. In mid-2018, 103,000 tonnes of wheat were collected for distribution to the Iraqi people–falling far below the expected 350,000 tonnes. That same year, the national government expected to import $1.5 billion worth of wheat. Poor harvests due to decreased water availability and poor management will most likely continue to strain Iraq’s food system.

Parallel to an aggregate of political forces contributing to the water crisis, a multitude of human-influenced environmental factors threaten Iraqi environmental security. Water scarcity not only has a direct impact on citizens but it threatens the whole basis of the Iraqi agricultural system. Iraq is a true tragedy of the commons: individual and group efforts to maximize industrial profits and to exert regional influence contribute to a water crisis that impacts the whole region.

While evaluating the multitude of causes surrounding the Iraq water dilemma, it is important to remember that real people are at the center of this humanitarian crisis. The United States is no stranger to water crises, especially in Michigan and California. Thus, Americans ought to express empathy for the thousands of Iraqis who’ve suffered similar crises. Yet, sympathy alone cannot solve any crisis–taking action is key.

Moving forward, the international community must pass substantive measures to reverse or at least ameliorate the crisis starting at the local level. The Iraqi government needs to step forward and enforce its environmental protection laws. Furthermore, the government should invest in public information campaigns, adopt greener policy agendas, subsidize farmers, research better irrigation techniques, and invest in restructuring its waterworks across the nation.

On a regional scale, Turkey and Iran should respect Iraq’s right to water. Building on this, when future dams and water infrastructure are adopted, these nations ought to consider the environmental impacts of their policies. Internationally, states need to enact sustainable climate policy and support the Iraqi community rather than degrade its institutions, especially the United States.

In total, not only is Basra a case study for Iraq, it is a case study for the globe. As humans degrade the environment through pollution and carbon emissions, global warming has real impacts on real people. Although Iraq is facing one form of environmental degradation, climate change and human conflicts already have real humanitarian impacts. If the human species doesn’t reverse its course of continued conflict and unchecked growth, Iraq will no longer be a case study. In hindsight, it will be a clear warning for what is to come.

Alejandro Alvarez is an undergraduate at the University of California, Berkeley studying Political Science and History. His interests center around nationalist movements in Europe and the Middle East, especially their impact on minority groups, political institutions, and civil liberties. View all posts by Alejandro Alvarez